Centuries of logic, theorems and propositions

Euclid of Alexandria, the "founder of geometry," was a Greek mathematician active in the 4th to 3rd centuries BCE. Very little is known about Euclid's life, but his knowledge about mathematics has survived over the centuries thanks to numerous translations, commentaries and reproductions of his life's work.

Here German printmaker Erhard Ratdolt's 15th-century edition of Euclid's Elements is the first printed edition and one of the earliest printed mathematical texts. Ratdolt's edition is translated from an Arabic edition by natural philosopher Adelard of Bath in the 12th century and edited by mathematician Campanus of Novara in the 13th century. Due to time and misunderstandings, this Latin text actually includes 15 books instead of the acknowledged 13 books for Euclid's Elements. Scholars have identified that Book XIV is from a work by Hypsicles of Alexandria and Book XV is a text by an unnamed 6th-century Roman surveyor. As one can see, keeping a text consistent over time and across languages can be difficult. Other versions of Euclid's Elements include text from Isidore of Miletus, Theon of Alexandria and other unnamed individuals. In some instances, copyists created small errors, which were then corrected in later copies or translations. Other editions of Euclid's Elements include "pop-up" geometric solids, detailed illuminations in the marginalia and full-color printed illustrations for visualizing problems and theorems. Yet all of these editions of Euclid's Elements strive to do one thing—share Euclid's math with the world. 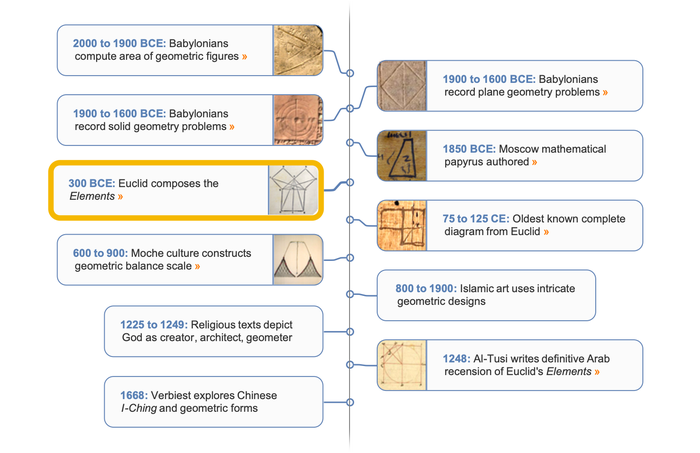