Al-Tusi's Commentary on the Elements

Persian polymath Nasir al-Din al-Tusi worked in Baghdad and in the observatory of Maragha in modern northwestern Iran. Al-Tusi is noted for more than 150 works, including the first major work on pure trigonometry. He also authored definitive Arabic versions and commentaries of works by Aristarchus, Apollonius, Archimedes, Menelaus and others, including a recension (revised edition) of Euclid's Elements.

Al-Tusi's recension is divided into 15 books, the first 13 of which follow the structure of Euclid's Elements. In particular, the first six books are on plane geometry, the next four are on arithmetic and the theory of numbers and books 11–13 are on solid geometry. The last two books are correctly noted to not have been written by Euclid and are attributed to the astronomer and mathematician Hypsicles of Alexandria. Al-Tusi's recension was completed near the end of 1248, and the British Library holds an edition from 1258. 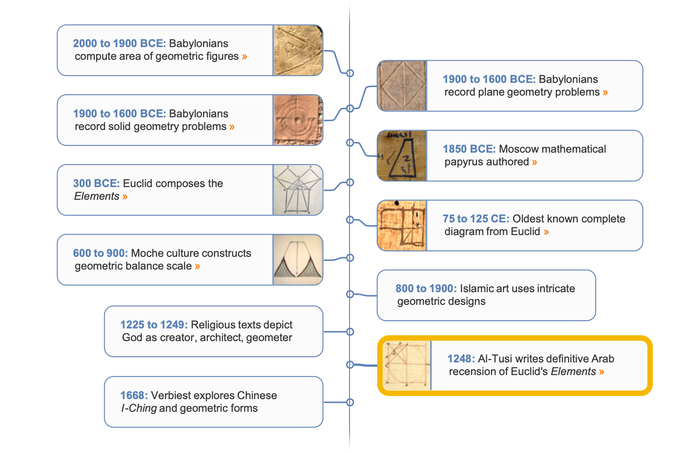