Samuel Fay, a 13-year-old schoolboy from Boston, wrote these cyphers around 1813. Like many students before and after him, Fay augmented his scholarly tasks with artwork, including a creditable sketch of a three-masted frigate strongly resembling the USS Constitution, which is concealed on the reverse side of the inside front cover's front endpaper. Since the word “Constitution” was printed immediately below the sketch of the frigate on the inside front cover, Samuel no doubt took the opportunity to sketch "Old Ironsides" (more formally known as United States Navy's USS Constitution and presently the world's oldest commissioned naval vessel still afloat) when docked in Boston Harbor in October 1817 for the 20th anniversary of its launching.

This cyphering book from the collection of Nerida Ellerton and Ken Clements also has a connection to other important figures in American history. When young Samuel Fay grew up, he married Susan Shellman in Georgia in 1825. One of their children, Harriet, would marry the Reverend James Smith Bush (1825–1899), the great-grandfather of 41st president George H. W. Bush (1924–2018) and great-great-grandfather of 43rd president George W. Bush (1946–). However, at some point, this cypher book seems to have been handed to Fay’s sister, Eliza, who took it with her to England. Sharing a cypher book with family members was not uncommon. Some cypher books bear the names of multiple generations, as the books were passed from parent to child to sibling and so on. 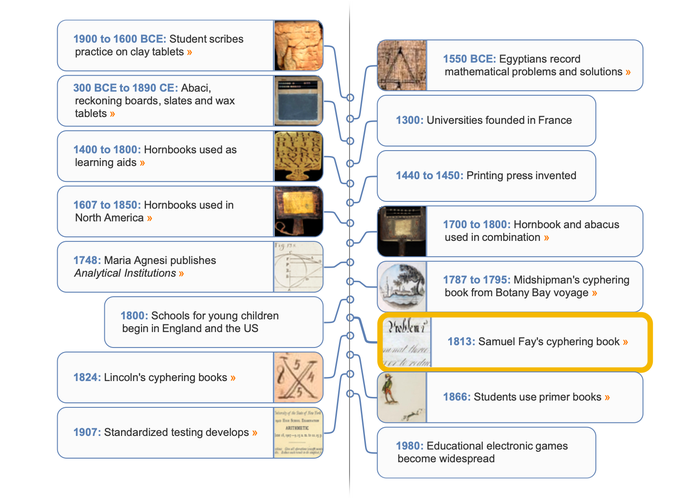