Early calculus textbook and the witch of Agnesi

Marie Agnesi's Instituzioni analitiche ad uso della gioventù italiana (Analytical Institutions for the Use of Italian Youth), published in 1748, was one of the earliest textbooks on calculus in Europe. Agnesi, who was the eldest of 21 children, wrote the text to teach her siblings the mathematical methods of Euler. However, her clear and illustrative text had a much broader influence as a result of its adoption for mathematical courses taught at French and English universities. Interestingly, while Agnesi used the notation and terminology of Leibniz, English translator John Colson used Newton's. Because of her work, and aided by a referral from Pope Benedict XIV, Agnesi became one of the first women appointed to a chair position in mathematics, natural philosophy and physics at the University of Bologna. However, according to contemporary accounts, Agnesi never served in the position, choosing instead to devote her life to charitable work soon after publishing her book.

Agnesi's name is today associated with the "witch of Agnesi," a plane curve that appeared in her text but which had been studied earlier by Fermat and Guido Grandi in 1703. Ironically, the English name is a mistranslation of what Agnesi called la versiera (meaning "sheet"—like the sail of a ship) as "witch" (from "the wife of the devil"—l'avversiera). While the curve has an interesting geometric construction and some nice mathematical properties, it is of interest primarily as a result of its popularization through Agnesi's text. 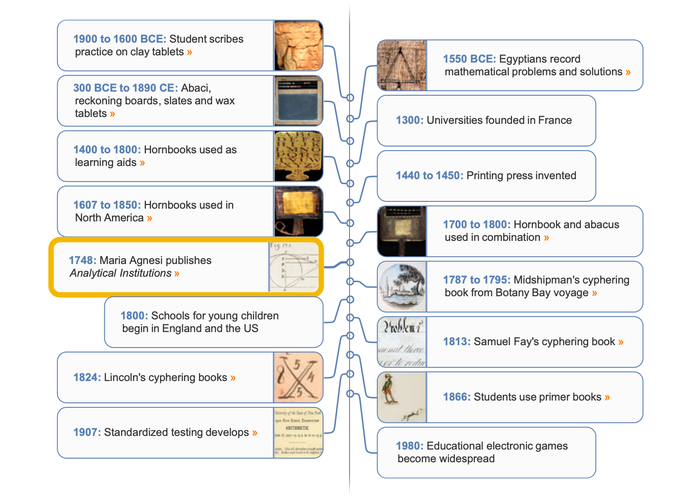 Vary the parameter to incrementally construct the witch of Agnesi (red curve) by rotating the line extended from the bottom of a circle:
Out[]=

The witch of Agnesi is a curve studied by Maria Agnesi in 1748 in her book Instituzioni analitiche ad uso della gioventù italiana (Analytical Institutions for the Use of Italian Youth), published in 1748 and the first surviving mathematical work written by a woman. The curve is also known as cubique d'Agnesi or agnésienne, and had been studied earlier by Fermat and Guido Grandi in 1703.
The witch of Agnesi has a number of representations as a parametric curve:
In[]:=
Block{a=1},ParametricPlot{2aCot[t],a(1-Cos[2t])},{t,0,π},
Out[]= 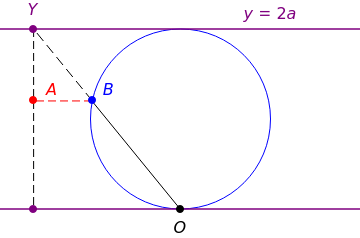