Shahr-e Sukhteh (meaning "The Burnt City") is an archaeological site in eastern Iran corresponding to a Bronze Age urban settlement. Shahr-e Sukhteh was one of the world's largest early cities. It appeared around 3200 BCE and burned down three times before finally being abandoned in 1800 BCE.

These ancient dice are among the world's oldest known and were excavated from Shahr-e Sukhteh together with a wooden backgammon-like gaming board. Four wooden dice and other pieces were found in grave 731. The dice are parallelepipeds and display numeration from 1 to 4 along the long faces following a variable order. They are estimated to have been crafted around 2500–2300 BCE. 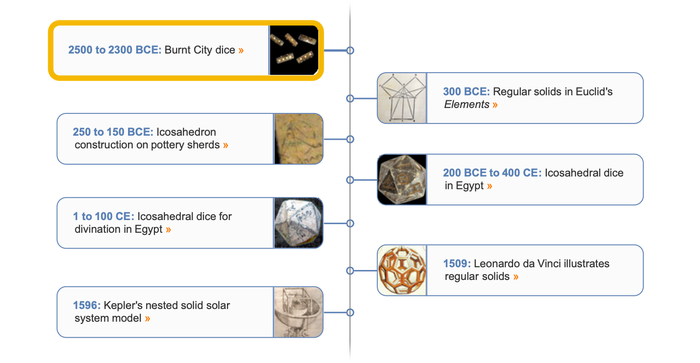 Explore the faces of a four-valued die from the Burnt City and incrementally morph it from its long skinny box shape to a modern six-sided cubical die:
Out[]=

Most modern dice are shaped like a cube, which is the unique six-sided regular solid. Modern dice therefore roll a number between 1 and 6 inclusive. Regular icosahedral dice (with 20 sides) were also known and crafted by the ancient Egyptians, Greeks and Romans. The earliest known dice, however, had a different shape from either of these and rolled a number from 1 to 4 .
In the 1970s, an Italian expedition to the Burnt City (Shahr-e Sukhteh) in Iran explored the graveyard of this ancient city. Among many other interesting artifacts, they found a set of 4 elongated dice and 27 tokens lying inside a basket placed near the pelvis of a human buried in a pseudo-catacomb (grave 731). Dating of the dice shows they were crafted about 4500 years ago.
While the Burnt City dice have six sides, they were numbered along only the four rectangular faces:
Out[]=

These dice and tokens were used along with a gaming board measuring 33.2 cm long and 12.0 cm wide to play the Game of Twenty Squares, a two-player strategy race board game that was popular in ancient Mesopotamia. The following figures (Piperno and Salvatori 1983) schematically illustrate the board and the location in grave 731 where it was found: 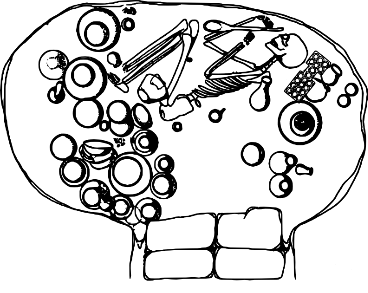 The game board was adorned with a knotted snake carved in relief and is identical in layout to a board found in the Royal Cemetery at Ur (British Museum item #120840) which has been dated to 2600 BCE. While the Ur board is identical in form to the Burnt City board, it is much more regally adorned, including many beautiful and intricate geometric patterns:

Interestingly, while the Burnt City dice are shaped like elongated boxes, the Ur dice are in the form of a tetrahedron, which is the unique regular four-sided polyhedron:
Out[]=
The historical relationship and evolution between different shapes of four-sided dice is not known. However, practical experimentation suggests that attempting to pick up a tetrahedral die by its apex can be challenging, meaning the elongated dice are easier to grasp. If the tetrahedral dice had numbers written on each face, as the elongated four-sided dice do, they would have the disadvantage that the number rolled would lie face-down and hence be hidden underneath the die. However, precisely to avoid this problem, two of the four corners of each Ur die are marked with a white blob, meaning when four of them are thrown, a total of 0 to 4 blobs are obtained.
While the Game of Twenty Squares is the world's oldest known board game, its rules have been deciphered and it can still be played today; see for example the linked video below.